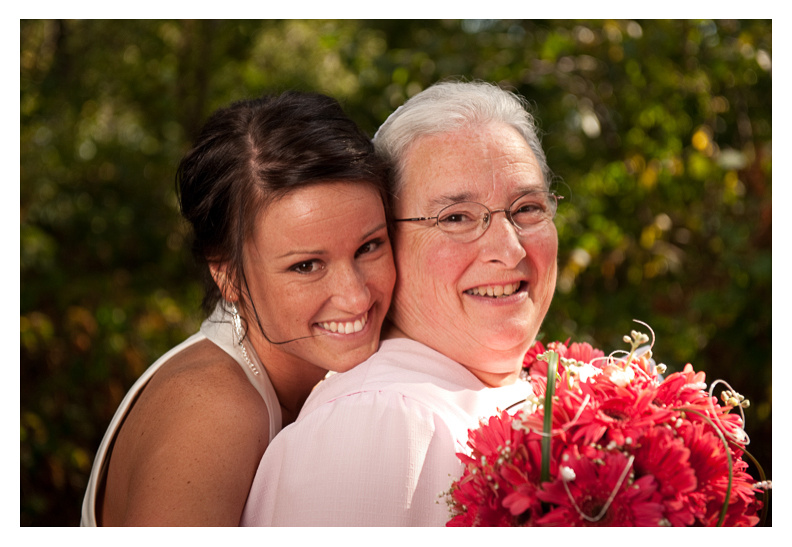 My mom and I are about as different as night and day.

She is focused, organized, and great at seeing the details but not getting swallowed whole and eaten alive by them (like yours truly).

She's smart.  She will research random house products that she's thinking of purchasing with the diligence of a scientist seeking a breakthrough discovery.  For real.  Ask my brother about that time he and my mom were together and he happened to be contemplating a wastebasket purchase.  He will tell you, she got scientific about those waste cans.  I'm poking fun, but let's be real - she's my first call when I need advice about this stuff.

She values authenticity in relationships.  I love this about her.  It's one of my favorite things.  She doesn't bother with the fake stuff.

She's a rockstar Bible teacher.  My theory on why she's awesome at this is that she totally nerds out on digging into historical context, then takes what she learns and instead of shoving information at you, she teaches by asking great questions and giving you just enough information to invite you to think and find the answers.  The x-factor of her teaching is that at the very root, she mainly just wants to know Jesus more deeply, and she just invites you to join her.  It's pretty awesome.  Now you want to attend her class.  You're welcome.  Advertisement over.

Lately I've been thinking a lot about what makes a life fulfilling.  At the core is Jesus, and I found Him a few years back, but I'm still trying to work out the whole fulfillment bit.  I get it that He loves me and all, but working out what I'm supposed to actually do with the time I've been given is another thing.  On some level, giving away the Love I've been given needs some practical wings to take flight.  I think it's probably pretty simple, because most of the good stuff isn't that complicated, it just takes me a really long time to get it.  I think one of the layers to living a life of purpose is living it poured out for others.  At least that's what I hear.  I haven't worked it out yet.  Obviously, because you generally don't talk about things you've got worked out.

I'm pretty sure my mom has though - gotten this giving thing worked out.  She is constantly pouring out her life.  When Pete and I bought a house fifteen months ago, she was the one who was always there working into the night with us during those five weeks of renovation.  She flies to Texas whenever my sisters move, not because they ask, but because it's how she rolls.  She watches her grandkids routinely.  She often asks me if she can help me with anything, and if she sees a way she can, she'll just jump in and do it.  There's never anything in it for her.

Sometimes you need to wear truth in front of you.  One day this un-tested snippet of truth was hitting me hard so I put it on pretty kraft paper.  Because that's what you do when you're holding a truth and you haven't found practical wings for it yet. 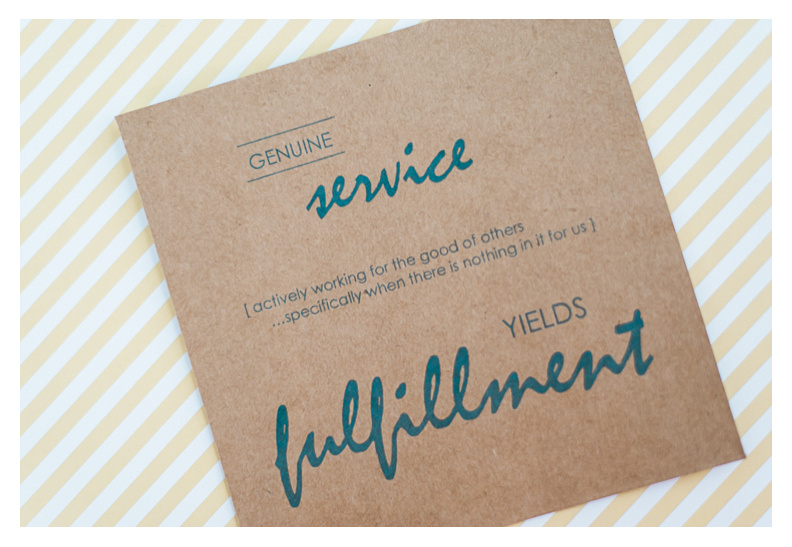 One of my favorite quotes is by Simon Sinek, who, by the way, has given several TED talks that you should check out on a day when life is less that inspiring.  It'll get you all fired up.  It'll be fun.  Anyway, the quote:

"Don't give to get.  Give to inspire others to give."

I loved this so much when I read it the first time.  People who give genuinely, inspire. My very loose definition of genuine service is actively working for the good of others when there is nothing in it for you.

You know who benefits most when genuine giving happens?  THE GIVER.  I know.  Counterintuitive, but I think it's true.  Think about a time when you've given and there was truly nothing in it for you.  No feathers in your cap, Facebook likes, or mental I-owe-you's in the bank.  Nobody even knew about it.  Felt good, didn't it?  When you give genuinely, it is you who receives.  You get a bigger heart in exchange for what you gave away.  You get filled with joy in exchange for the part of yourself that you gave.  You can't pick up a bigger heart and some joy at the grocery store.  God knows, most days I wish it were that easy.  Forget the peanut butter, I need some joy.  Giving is at its best when it costs us something.  Life gets really free when it's not about us anymore.

I think that's been my mom's best kept secret that she hasn't talked about because people who live things out don't need to talk and obsess over them like the rest of us.  Mainly, I just feel grateful.  Grateful to have been on the receiving end of all of her giving, yes, but more than that, her lifestyle of actively working for the good of those around her when their is nothing in it for her is highlighting my own path to freedom.  And this is inspiring.

Mom, thank you. Thank you for not being a CEO, even though you would have been awesome at that and if you decide to go for it, I'll be first in line to cheer you on.  It sounds cheesy, but I'm writing this with tears in my eyes, because it's not about the stuff you gave as much as the way you chose to live a life that wasn't about you.  That is such a big deal in a world that is shouting over each other for attention.  Truth is, if you'd chosen a different path, I know you would have still brought this truth to whatever area you'd have chosen:

It hasn't been about you.

You've lived quiet.  You've lived fulfilled.  And more than all of those people whose books I've read and whose podcasts I've listened to and whose mantras I parrot...you've inspired me most.  Thank you for giving because it's helping me get that up is down, and that a life spent on others is really fullest.  Love you.